Linebird’s team is excited to announce that on October 28, 2020, they performed a successful test of their patent-pending UAS payload system with the Sensorlink Ohmstik on a live 115kV transmission structure in Virginia. While they had already proven the Linebird system was capable in a controlled energized test environment in September 2019, this was the first opportunity for Linebird to demonstrate their system on real-world energized transmission infrastructure.

The test took place at the beginning of a transmission right-of-way at the foot of a tower structure. The target was a compression dead-end connector at the junction of the tower insulator and phase conductor, with the objective being to achieve a successful series of micro-Ohm measurements using the Sensorlink Ohmstik. This marked the first time Linebird tested its system on real-world transmission infrastructure conditions and a chance to validate the UAS method of taking Ohmstik resistance measurements to assess connector health.

This two-stage testing event was facilitated by members of a regional utility in attendance. A line crew and bucket truck were on standby as the Linebird crew arrived and began their preparations. After donning PPE and setting up a Matrice 600 Pro UAS equipped with the Linebird payload system and an Inspire Pro UAS for documenting the test procedure, a safety briefing and flight plan discussion ensued. Linebird’s four man crew took their positions and began the first of two operations. 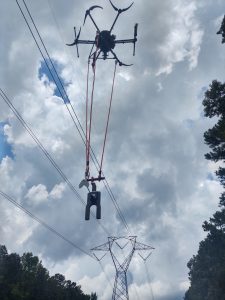 The goal of Stage 1 of the test was to slowly approach the live-lines with the M600 UAS (with no payload attached) and determine the effects of electromagnetic interference from the high voltage transmission lines.  After taking off, the remote Pilot in Command navigated the UAS directly underneath the power lines, then ascended towards the outer conductor.  The UAS reached a vertical distance of approximately 6 feet beneath the live line. No compass, GPS or flight system errors or radio interference occurred. For safety reasons the pilot did not ascend any further towards the line, and returned the UAS to the Landing Zone to prepare for Stage 2.

Stage 2 of the test involved taking multiple resistance measurements of the dead-end connector attaching the target phase conductor to the insulator and greater tower structure. Linebird’s suspended payload system, outfitted with the Sensorlink Ohmstik and emergency payload drop system, hung from the M600 UAS as the pilot in command ascended and positioned the UAS to approach the conductor and connector. The pilot positioned the UAS and Linebird system approximately 20 feet above the conductor and began to descend, eventually landing the Ohmstik – with custom built ballast and guide-rods – onto the dead-end connector and conductor for its first measurement. Within a few seconds the Ohmstik receiver confirmed a successful micro-ohm reading, and the pilot lifted the UAS, payload system, and Ohmstik off of the line to reset the device and prepare for another reading.  Two more successful readings were performed within a two minute span.  All three micro-ohm readings were within acceptable limits for the dead-end connector, confirmed by the utility transmission engineer onsite. 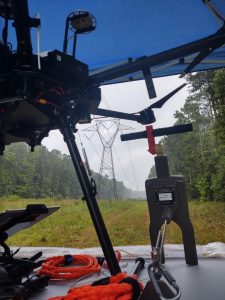 Now that the Linebird payload system has been shown it can make multiple quick, accurate readings of transmission connector health via UAS, the team is excited about the future and is moving forward, perfecting their system’s components and processes. They look forward to scheduling more demonstrations and coordinating with utilities nationwide to bring their innovation to market. This test marks a milestone in Linebird’s development as they progress towards a safer, more resilient electrical grid at a lower cost.